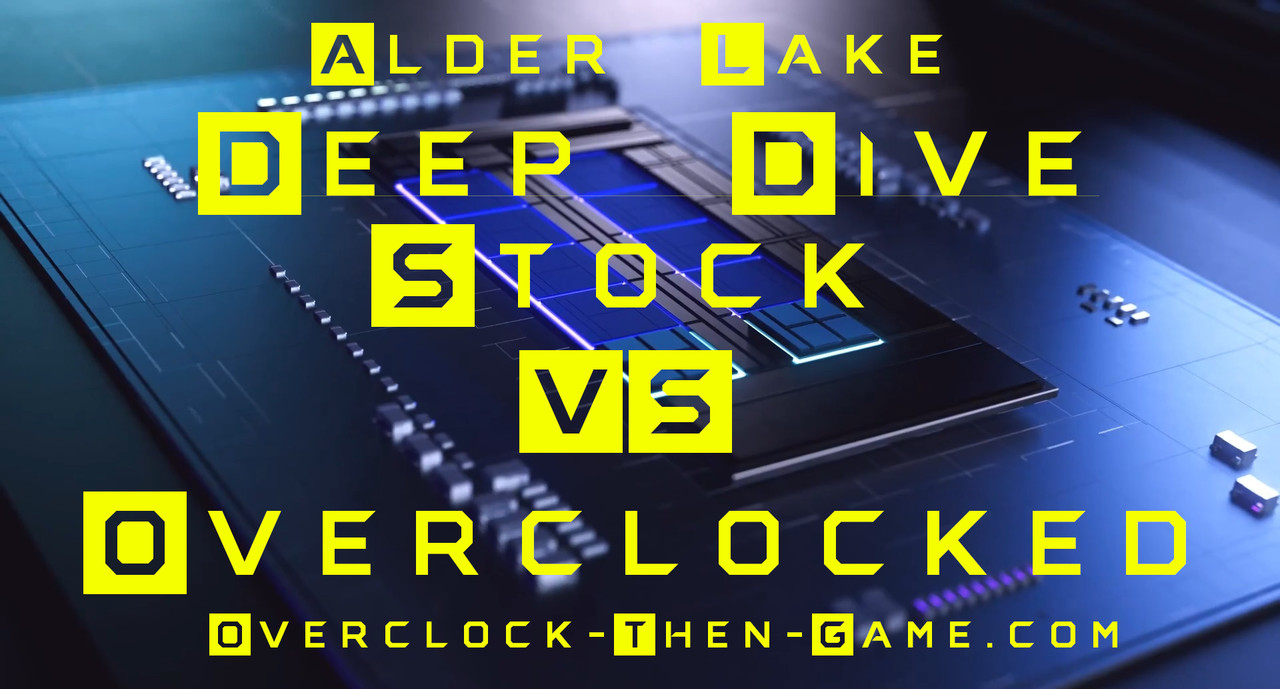 When all cores are being used the Core i9-12900K default frequency is: Performance Core 4.9Ghz – Efficient Core – 3.7GHz, Ring Freq. 3.6GHz. Alder Lake official DDR5 supported frequency is DDR5-4800Mhz and that is what I am using. Even with stock settings the i9-12900K does very well in actual workloads and synthetic benchmarking. The Ring frequency is actually set to 4.7GHz by default during light workloads or idle periods, but it drops down to 3.6GHz once there is a decent load on the PC. Luckily the Ring can easily be overclocked to 4GHz for many enthusiasts without increasing the voltages. IA is what Intel has been calling their cores for many years: “Intel Architecture”, that would be the Performance Cores and Efficient Cores. The stock vCore for my CPU is around 1.26v and each Alder Lake CPU will have slightly different voltage numbers. This is because each Core or ‘IA’ Core has its own VID. This VID is determined when the core, both P & E core, is created and measured for all of the supported frequencies (P-Cores: 700MHz to 4900MHz or 4.9GHz & E-Cores 700MHz – 3700MHz or 3.7GHz). The Core i9-12900K base frequency is actually 3.2GHz, but Intel Turbo technology allows cores to run higher (P: 4.9GHz\5.2GHz & E: 3.7GHz); so it’s safe to say that these CPUs are already overclocked out of the box like everything else nowadays. From that point the CPU VID will request voltage via the SVID from the motherboard \ VRMs. So each CPU will have various VIDs. I won’t go any deeper than this for now, but now we know enough to speak about the overvolting, overclocking and undervolting.

Intel definitely pushed the Core i9-12900K to the max and probably pushed a little too far. In my initial review I was able to undervolt the CPU without losing any performance and lowering both power usage and temperature. I went from using the stock voltage, 1.26v, to using only using 1.10v on average (1.10v - 1.15v); getting as low as 1.08v. So while my CPU VID was requesting high voltages it was possible to stabilize and run the CPUs with much lower voltages. This can be accomplished in several ways, but many people will simply lower the V \ F curves (voltage frequency curves). Many 12900K owners realized this and started undervolting their CPU on day one. This makes Alder Lake very efficient across all workloads. Not only was I able to undervolt Alder Lake, I was able to overclock the Efficient Cores from stock 3.7GHz to 4.0GHz as well. This gave me a very nice performance increase and made Alder Lake even more efficient. About a week after undervolting and overclocking the E-Cores I decided to start overclocking the P-Cores. The Performance Cores can quickly add a lot of wattage and let’s not forget my default voltage was 1.26v so going higher than stock frequencies should require more voltage. I quickly learned that I was correct and hit a brick wall. That brick wall was high wattage which leads to higher CPU temperatures which causes throttling; therefore it made no sense to keep pushing higher voltages into my CPU. During that time my LGA1700 mounting brackets were delivered and I installed it while using the included thermal paste. I am using a 360mm radiator AIO as well, but the temps more less remained the same. What made this even more frustrating was that I was only able to go 0.01v above my stock voltage (1.26v) to only 1.27v before the CPU would throttle due to heat. I was hoping to get a bit more out of the CPU. I pushed my CPU to P:5.1GHz(+200), E:4.1Ghz (+100) when I wrote my last overclocking article. Luckily I found an easy solution for better temperatures across the processor and that was to try different thermal pastes to hopefully resolve the problem. So I purchased a different thermal paste and at first nothing appeared to be different and I thought that maybe the thermal paste needed to cure. However, one thing I noticed right away was that when I pushed the CPU voltage (vCore) higher my CPU did not throttle. Success! The heat transfer was definitely better. In the future I might go into more detail comparing various thermal paste and my results. I’ve never benchmarked or compared thermal paste thoroughly so that should be fun. Now with all of that being said I was able to push my CPU voltage (vCore) up to 1.36v in the UEFI\BIOS and while average 92c during benchmarking. This put the CPU wattage at roughly 297 watts. I was able to push my Performance Cores up to 5.2GHz (+300) and run my Efficient Cores @ 4.2GHz (+600) with no stability issues along with DDR5-5600Mhz and the Ring overclocked to 4.0GHz (+300). I will work on possibly lowering the voltage in the future as I continue to learn more about the platform.