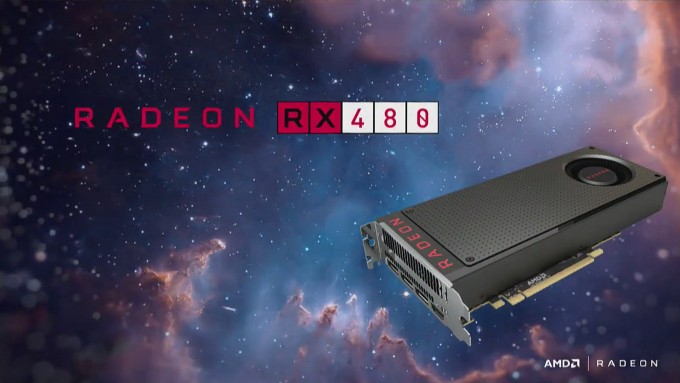 On the GPU side AMD has revealed their RX 480 and that it will only cost a very affordable $200. AMD has limited funds and this strategy could help them gain more market share from Nvidia. AMD GPU sales increased by 6.69% in Q4 2015 and the Radeon R9 380X[$229], which released in November 2015, had no true competition from Nvidia. AMD GPU market share also grew to 23% in 2016. AMD is hoping that this trend continues with their Polaris 10 and Polaris 11 “mainstream” strategy. With Nvidia revealing the GTX 1080 & GTX 1070 ahead of Computex 2016, effectively paper launching both cards, it appeared that everything was going as planned for AMD. The GTX 1080 has a lot of controversy surrounding it, but the one the largest issues was the premium reference “Founders Edition” price point [$699.99]. At the moment the GTX 1080 “Founders Edition” is the only version available and the 1070 could follow suit if Nvidia can’t supply enough GPUs. The GTX 1070 [$379 - $479-FE] is scheduled to release on June 10 th, 2016. AMD’s RX 480 is scheduled to release later on June 29 th, 2016.

The Supply and Demand Issue

One would think that AMD would try to speed up the RX 480 release, but in reality AMD doesn’t have to. AMD knows that some people will buy their favorite brand no matter what and there is nothing AMD can do to change that. The RX480 competitor was never the GTX 1080 or the GTX 1070 to begin with. AMD still has the mainstream market and it’s very unlikely that Nvidia will drop the price of the GTX 1070 to compete with a $200 GPU. At this point AMD plan just might work since the GTX 1080 Founders Edition is the only edition available and most gamers won’t spend that type of cash on a GPU that will be beaten within a year. The GTX 1070 look great in the benchmarks, but it’s still nearly $400 - $500 just for the reference version. It appears that Nvidia is having issues getting the GTX1080\1070 to the market which could make it difficult for Nvidia to target the mainstream market successfully at the moment. Nvidia will be more focused on supply and demand for their GTX 1080\1070 GPU lineup. 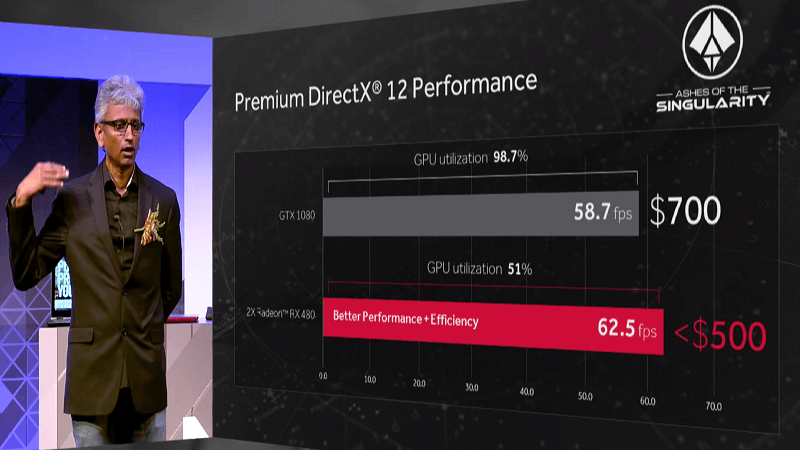 AMD showed the RX 480 running dual GPUs against a single GTX 1080 in Ashes of the Singularity. The dual RX 480 actually beats the single “$700 solution” for less than $500. This could be a strong selling point for AMD. At this point most people should know that AMD architecture is better suited for the DX12 and Vulkan API workloads. Obviously we will need to wait for more benchmarks to release across the web, but this could be big for AMD. AMD claims that they will be focusing more on CrossfireX support. Single card solutions are usually favored over dual card solutions by some gamers. DX12 and Vulkan multi-card support should assist with CrossFireX once developers start to focus solely on the newer platforms. The frame times should also be much better with the newer APIs than previous APIs as well.

The first thing some people decided complain about was the “image quality” of the video. The RX480 in CFX running against the single GTX 1080 showed more snow on the AMD side. Some people took that as AMD cheating on the benchmarks. It wasn’t long before screenshot comparison was being posted on several sites to attempt to downplay the results. It’s fair to say that most Nvidia users had written off Ashes of the Singularity as a benchmark, but that’s only before Nvidia brute force approach with the GTX 1080\1070. Now more Nvidia users are praising the benchmark results while some Nvidia users could care less about DX12. 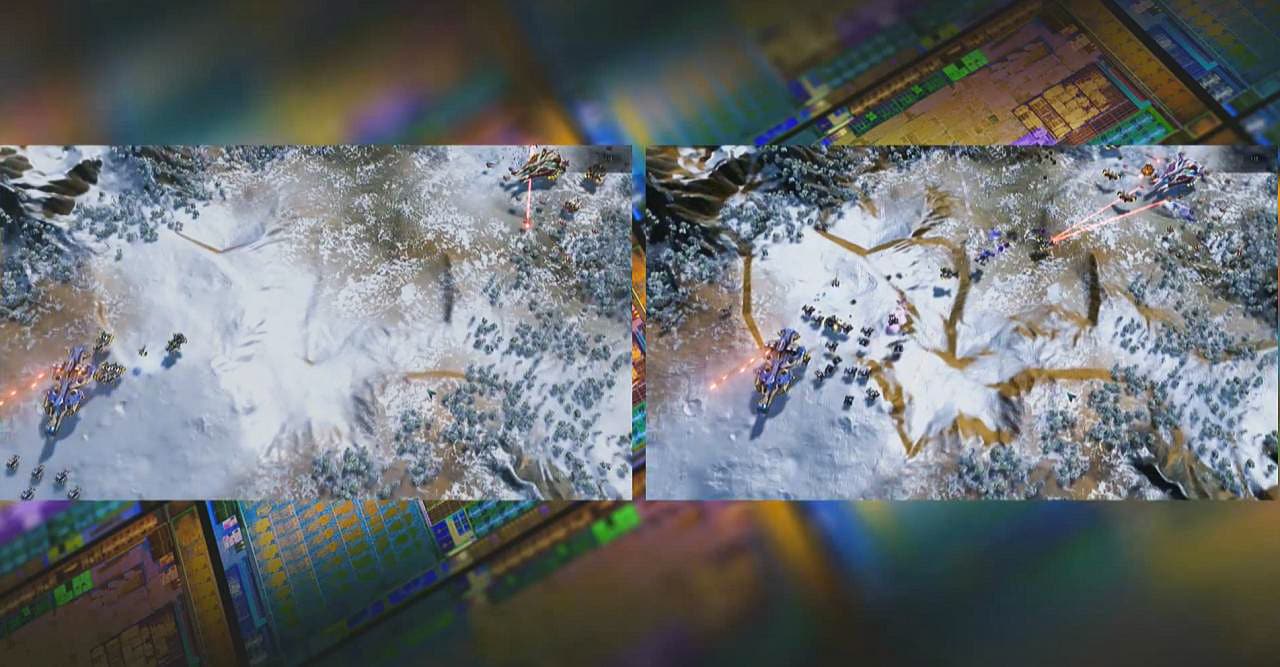 Apparently most people didn’t understand what “procedural generation” meant or didn’t understand that Ashes of the Singularity uses randomly generated procedural generation for each benchmark. This also ensures that AMD or Nvidia can't cheat through certain driver implementations. In other words there is no way for either GPU manufacture to know what’s happening during the benchmark ahead of time. We need more benchmarks like this in my opinion. This caused AMD to post on Redditabout this false outrage. Apparently the GTX 1080 has problems rendering the shaders properly, which means that the GTX 1080 actually doing “less” work than the dual RX 480s.

It’s also worth noting that AMD ran the test “correctly” in my eyes. AMD ran the benchmark 10 times to ensure the results were accurate. Obviously everyone can’t run benchmarks 10 times, but this is good to know. Out of all of the things that people should have “noticed” about this benchmark the RX 480 showing more “snow” was the outrage[?]. The fact that a $699.99 GTX 1080 FE barely hits 60fps at 1920x1080p in AotS on various benchmarking sites should have more outrage. 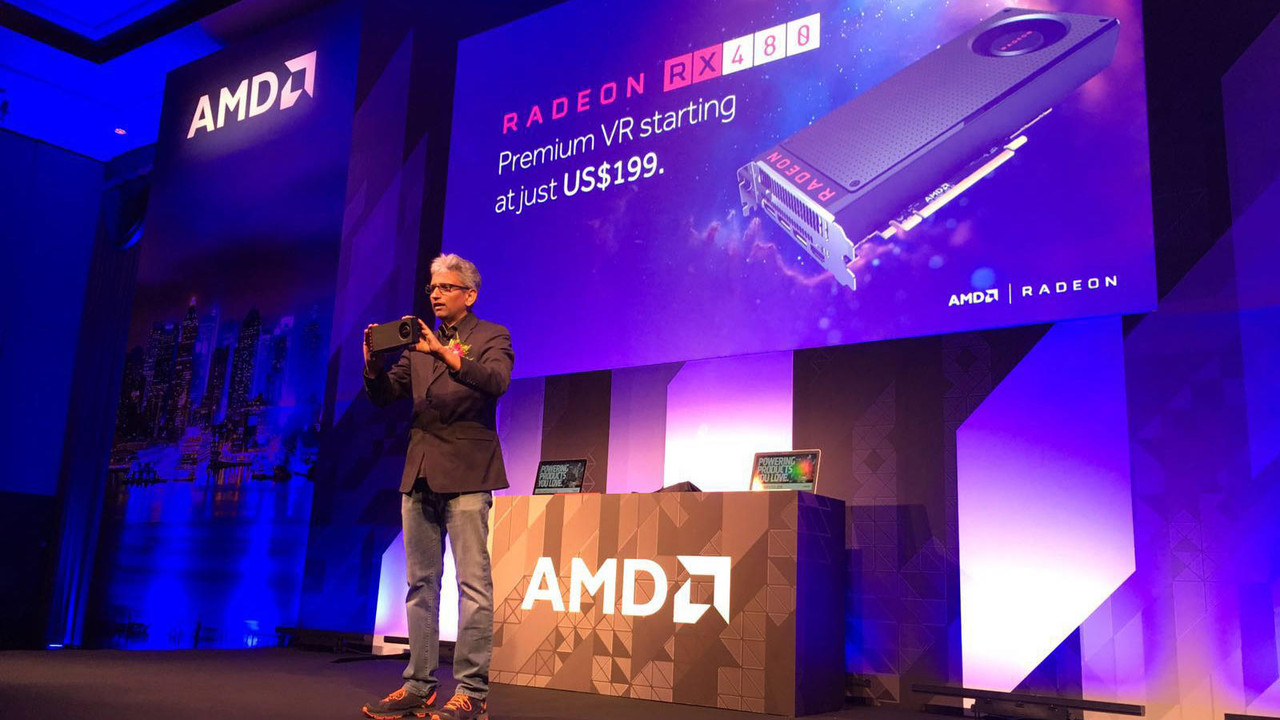 Nvidia had 80% of the GPU market in 2015 at one point. That is the WORLD GPU market by the way. Luckily AMD has clawed back and rained some of the market, but the point is that Nvidia GPUs are selling well regardless of how much market AMD reclaims. Even though Nvidia increases their prices on their GPUs it is not making some people think twice before pre-ordering or purchasing an expensive card. This is bad news for PC gamers and will only hurt the platform even more. Without some form of competition monopolies can charge loan shark prices. Nvidia isn’t quite a monopoly completely, but they do own a large share of the market. This had led to practices such as the:

This precedent has been set in stone thanks to the PC gamers. Thankfully AMD has always had a GPU capable to counter the $1000.00-$3000.00 price point. This same type of pricing is found with Intel as well. Without competition the largest manufactures can charge unreasonable prices for tech that will be diminished by newer tech in less than a year. The trend can easily be seen with the GTX Titan series which has always been countered by an AMD GPU for half or less than half of the Titan price. The GTX 1070 and GTX 1080 are also setting a new precedent for “premium reference” fan GPUs. The “Founders Edition” is showing everything that’s wrong when big companies make a lot of money and gain a large share of the market. If all goes as planned for AMD this can be a great opportunity to keep prices decent.

In other words AMD is in a perfect position to give gamers a great experience for the price per performance. Apparently 1080p is their initial focus and it appears that 1440p will be their next focus. It shouldn’t be that hard to get great 1080p or 1440p performance within $150-$350. Most people won’t spend a ton of cash on high end GPUs so AMD could have a golden chance to reclaim more market share. They need to get this right though and so far everything appears to be looking great for their mainstream strategy. Whatever happens should benefit the average gamer. The mid to high-end prices need to stay in check so we don’t continue to see $699.99 as a standard for GPUs initially. It makes you wonder how much the high-end GPUs [Pascal “Ti \ “Titan”] will cost. I’d hate to see mid-range cards continue to go above $350-$400.

Now this one is surprising, Jen-Hsun Huang basically spoke about the shortcomings of VR. Nvidia has been using VR to push a lot of people to purchase their GPUs and have hosted VR events. Not only that, but Nvidia had dedicated portions of their website to VR and their VRWorks [Gameworks for VR]. There is a "VR Store" for crying out loud with a list of "VR-Ready Graphic Cards". Nvidia also sales "VR- Ready PCs" and "VR-Ready Notebooks" on their VR Store page.

Here is the quote from Jen-Hsun Huang at Computex 2016:

"Oh my gosh, we’re missing so much. First of all, VR displays are a little too cumbersome. It has to be much more elegant, being connected by a wire has to be solved The resolution has to be a lot higher. The physical worlds do not behave according to the laws of physics. The environment you’re in isn’t beautiful enough. We’re going to be solving this problem for the next 20 years." - Jen-Hsun Huang 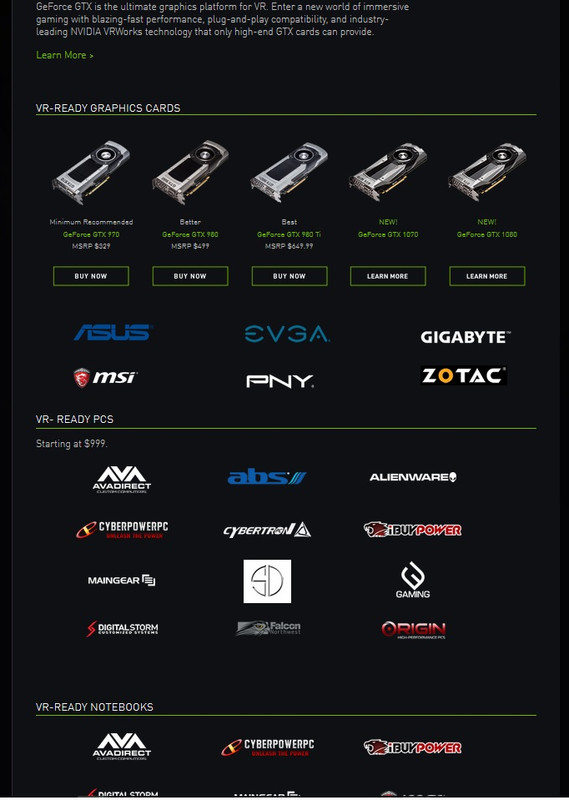 Nvidia's competitor, AMD, is also pushing VR and the Radeon RX 480 along with other Polaris 10 GPUs goal is to bring GPUs capable of VR at a affordable price. VR has been gaining speed for awhile now and has plenty of support from many companies. I find it very weird that Jen-Hsun Huang is talking about the VR issues when Nvidia has been pushing VR just as hard as the other companies. Could Nvidia simply be trying to push their Gameworks IP into VRworks as the main goal? Hopefully that's not Nvidia's end game because Jen-Hsun Huang makes all of the Nvidia technologies and GPUs appear to be expensive contradictions. Nvidia has no plans to solving the VR issues as Jen-Hsun Huang explained:

“As a company we experiment a lot,” he said. “We have hundreds of projects in the company… most of them get thrown away.”
“Having 20 years for employment is a good thing.” - Jen-Hsun Huang

Otherwise it appears Jen-Hsun Huang is trying to down play VR due to AMD affordable big push in the mainstream market. The mainstream market could be a big thing with the field wide open to AMD at the moment. Regardless of what he thinks VR is moving at a much faster pace now. VR has always been about expanding our imaginations and I'm sure no one is expecting a 1:1 experience anytime soon. Despite Jen-Hsun Huang statements I don't believe it will affect companies push to bring VR to more people and gamers across the globe.

There has been some speculation that AMD will offer dual GPUs on one interposer, but nothing has been officially revealed. That would be very nice considering the size of the cards and the power of the DX12 and Vulkan APIs that will properly utilize the dual GPU setup. With all of that being said this is all I have for now. I will update if more information releases that’s worth talking about. It’s an amazing time to be a PC gamer at the moment and it’s great to see high end offerings and mainstream offerings. There are plenty of GPUs for different types of gamers to choose from since we still have access to last year GPUs. We just need to make sure that the prices don't continue to increase to unrelistic prices. Feel free to let me know what you think in the comments below.