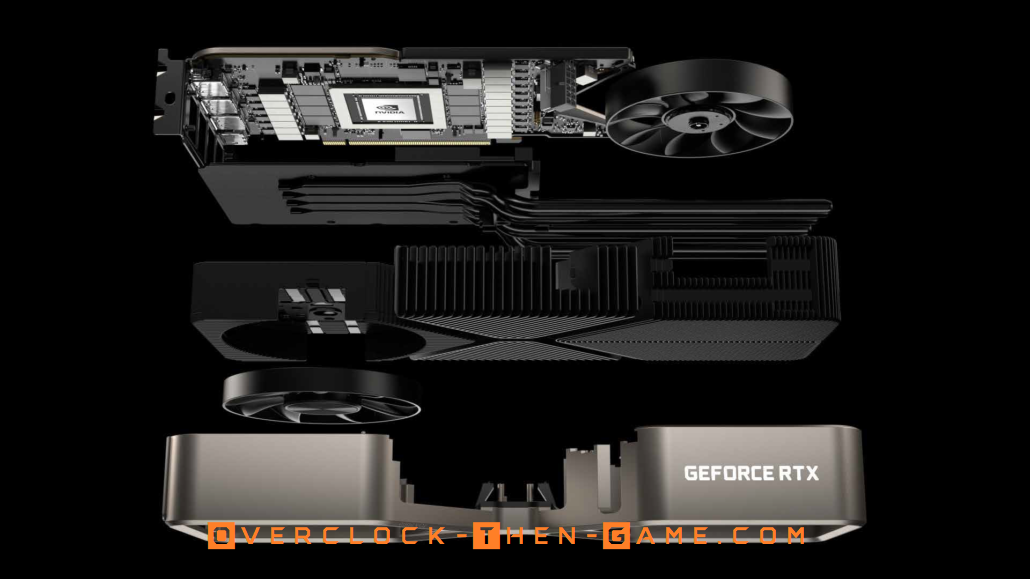 Now let’s take a look at the RTX 3080 and X58 power consumption. Running my CPU with a 4.6Ghz will definitely pull much more wattage with this old platform. Please note that I am also running Delta and Gentle Typhoon fans and trust me, there is nothing gentle about those typhoons. These powerful fans can pull a decent amount of wattage. The first thing that caught my attention was the very low idle power consumption from both the X58 and the RTX 3080. Daily light usage outside of gaming pulls a very low amount of wattage, only 182watts on average and that is without the powerful fans running. With a few of the fans running it will be somewhere around 195watts to 200watts at decent speeds. So take that information as you please. You can subtract 20watts from all of my 4.6Ghz test if you like, but I’m showing the results with everything else, other than the idle results, as is with the fans running. However, pulling only 182watts during Idle is pretty good. The first generation Intel CPU uarch is pretty good along with Nvidia’s Ampere. This time around I decided to use both 3DMark and Unigine and record the power consumption numbers to give a decent representation of both the CPU and GPU when running at their max. We can see 3DMark’s Fire Strike pull 593watts on average and Unigine’s SuperPosition pull 624watts. That’s a pretty decent amount to pull, but we need to see what happens with an actual game instead of synthetic benchmarks.

Now I will like to turn the attention to an actual game, Resident Evil 2. This game performs very well and makes the CPU and GPU work for the frames at 4K. I performed a series of test using both my 4.6Ghz and 3.8Ghz OC. My 3.8Ghz pulls very little voltage maxing out at 1.16volts on the CPU core, while 1.36v is required for the 4.6Ghz OC (Idle voltage is much lower obviously). It is worth noting that all benchmarks in my X58 + RTX 3080 article was ran using the 4.6Ghz overclock. I simply ran 3.8Ghz for power consumption comparisons. We see that running the GPU Core at stock with the Power Limit (PL) set to its normal stock setting (100%) pulls 655watts on average with my 4.6Ghz OC. Locking the FPS to 60 drops the wattage by 70watts down to 585watts on average. That’s a pretty nice start.

Now if we leave the frame rate unlocked and drop the Power Limit (PL) down to 80% we see a reduction of 55watts when compared to the Power Limit at 100%. That’s great, but I know that I can do better than that. Dropping the Power Limit down to 50% drops the wattage to 465watts on average. That’s a reduction of 190 watts when compared to the Power Limit at 100% and at this point in my test I am receiving around 60-64fps at 4K. So in that case I might as well lock the FPS to 60fps along with the PL set at 50%. As you can see I’m only pulling 450watts which is awesome for a high 4.6Ghz overclock on a first generation Intel CPU. I’m sure most know, but I will repeat it just for those don’t know this about Nvidia and AMDs GPUs. Simply locking to the FPS to a specific number won’t always save you the most power since the GPU will still be running near full speed. Adjusting the Power Limit will help as well as undervolting and underclocking if necessary. So in my case since I am CPU limited at certain resolutions I can simply find the average FPS that my CPU can produce and lock my FPS to that number while adjusting my Power Limit so that the GPU is only using as much power as necessary to match the average FPS. Otherwise I can just lock the FPS to any arbitrary number that I choose and make the GPU match the performance by adjusting the Power Limit. 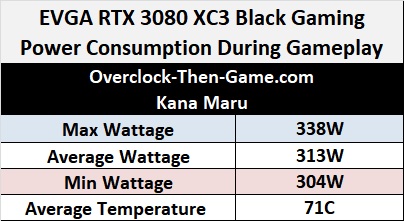 Now moving on the GPU temperature I saw an average of about 71 Celsius. This is a pretty hot GPU, but the performance backs it up. You’ll definitely want cool ambient airflow or liquid cooling if you feel that 71c is a bit warm for you. You can also adjust the Power Limits which is tied to the GPU temperature by default. As far as power consumption goes I found that the EVGA RTX 3080 XC3 Black Gaming pulls an average of 313Watts across all of my ‘Real Time Benchmarks™ ‘ which is pretty good during actual gaming sessions. The minimum wattage was 304watts and the maximum wattage was 338watts.