So from what we have seen and what most people probably expected, the '2008' X58 performs very well at higher resolutions such as 4K. Below I have compared the X58 + X5660 against modern machines running anywhere from 8C\16Ts up to 16\32T. The comparisons consist of several sources for nearly all of the games and benchmarking apps listed below. Even though the PCIe 2.0 bandwidth is approximately 330% slower than PCIe 4.0 performance in 3DMark’s PCIe Bandwidth Test the performance at 4K doesn’t change that much. Certain games at 4K that depend more on the CPU performance will show an increase in FPS over the older X58\PCIe 2.0 platform, but normally the amount of FPS in most games are normally within 1FPS to 5FPS. For example, based on my comparisons against newer platforms we can see that Control (4K) performs identically while using rasterization and shows a 1 FPS difference when using Ray Tracing. Other games like Metro Exodus (4K) can show up a 7FPS difference when using Ray-Tracing, but only show a 1 FPS difference when using rasterization. Lower resolutions can and will benefit from a faster CPU, but when does that become a real issue for people running an older X58 platform in 2021? For instance in Doom Eternal at 1080p I pull over 300FPS which is more than enough for the majority of the monitors sold in the market today. However, a newer platform can pull well over 320FPS - 350+FPS, but most gamers won’t be buying this GPU for the 1080p or 1440p performance in most cases. This is a 4K GPU for sure, but Ray Tracing and certain APIs used will ultimately be the limiting factor in most cases in addition to the GPU itself.

So at the end of the day I am still impressed with the Intel X58 platform with DDR3-1600Mhz. For gamers who want the 4K experience with newer GPUs, the PCIe 2.0 (x16) slots should not be a problem moving forward. As games start to push more advanced types of rendering through the pipeline this could possibly change. The adaptation is normally slow with the latest and greatest technology, but given the numbers I am seeing it’s going to be a while before the PCIe 2.0 bandwidth is fully saturated. Remember that 16GB\s (theoretically) needs to be saturated, or roughly 12GB\s in normal usage after the overhead & encoding. So far in games such as Cyberpunk 2077 with Ray Tracing enabled I am seeing anywhere from 400MB\s to 800MB\s being transferred at 4K. To fully saturate the PCIe bus it will need to move an additional 71% of data and I just don’t see that happening in anything other than very specific synthetic benchmarks at this point. I will continue to ensure that the PCIe bandwidth usage during gameplay are correct, but that is all I can see right now. Perhaps if more game engines start to focus solely on Ray Tracing things could possibly change over time. However, I still don’t see traditional rasterization lighting going away anytime soon so the PCIe 2.0 tech should not be the limiting factor moving forward. The limiting factor at 1080p and 1440p will be the CPU and the limiting factor at 4K and above will be the GPU in nearly all cases.

Below we can see the comparisons against modern platforms. The list below shows a compiled average of the modern platforms against my X58 + EVGA RTX 3080 XC3 Black Gaming + PCIe 2.0. The “Modern Platforms” are from various RTX 3080’s (Founders Edition and 3rd party OC'd RTX 3080’s). I didn’t use my Overclocked RTX 3080 results and only used my stock EVGA RTX 3080 XC3 Black Gaming results from my review. Some of the percentage differences look worse than the actual FPS. The breakdown might be helpful for those wondering how the older PCIe 2.0 - X58 architecture performs against the newer platforms from Intel and AMD. When I combine the total performance numbers across the samples listed below we see an overall decrease of only 0.05% when compared to newer platforms. Please note that there a ton of games out there to benchmark and I have chosen the results below based on the amount of information I could find and validate from several sources. Feel free to leave your comments in the comment section on the next page. 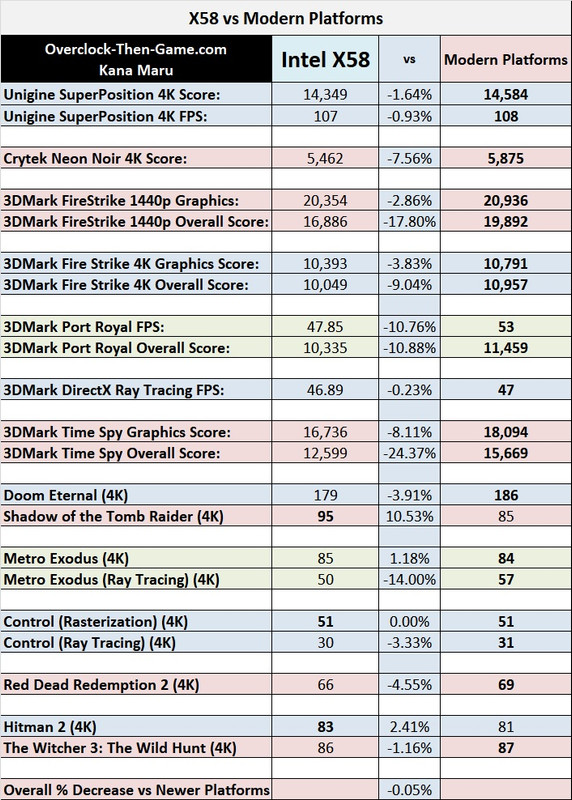