If the “Village” area didn’t give you a ton of Resident Evil 4 vibes the Castle definitely will. The Castle is easier to run since there is less to render. This area shows the Ray Tracing features much better since there are plenty of dim lit areas and candles throughout the castle. I have included pictures later the article for the Rasterization and the Ray Tracing differences. Now to the benchmarks: 1440p shows 218FPS on average with a low of 149FPS. When I enabled Ray Tracing we see an average of only 131FPS and a low of 97FPS. This is a pretty huge drop off which shows a 40% decrease in the average FPS while the minimum FPS shows a drop off of about 35%. However, for some gamers this drop off might be worth it since Ray Tracing still pulls a nice 131FPS on average at 1440p. Looking at the 4K results we see an average of 125FPS and 87FPS for the minimum. With Ray Tracing enabled we see 83FPS on average and a minimum of 58FPS. That comes out to a 34% drop in the average FPS and a 33% drop in the minimum FPS when Ray Tracing is enabled. That still might be enough performance for most gamers to take the hit for better visuals. 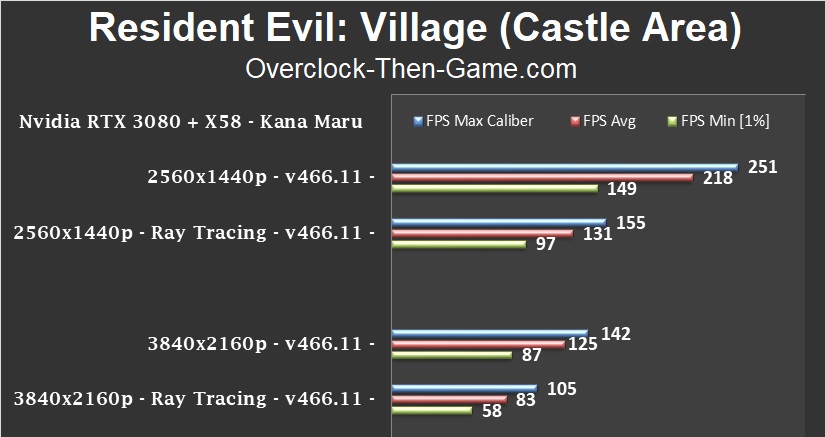