Apparently NewEgg is finding ways to prevent the bots from checking out and paying automatically, but NewEgg has also found a way to cash in as well. Remember corporations aren’t your friend and their main goal is to make profit and keep shareholders happy. NewEgg started pairing their popular brands (RTX, Radeon, Ryzen) GPUs\CPUs with other expensive PC components that many don’t need or care about such as Motherboards, PSUs and RAM. NewEgg also updates the Combo’s with new webpages so that a bot can’t simply focus on one page indefinitely. The goal for most users is to return the unneeded item in the combo. This can help and hurt NewEgg since they are obviously trying to sell merchandise no one wanted or couldn’t sell (overstock), but also this could be bad business practices since NewEgg is not allowing returns on all of the items paired during the initial combo sell. For example, NewEgg can prevent the returns of certain items paired with specific GPUs that many gamers want right now and they have actually done this with some RTX 3000 Combos, but not all of them. This controversy has blown up recently overnight and NewEgg seems to not want to mess up a good thing while it’s going so nearly all of the Combo items can be returned. 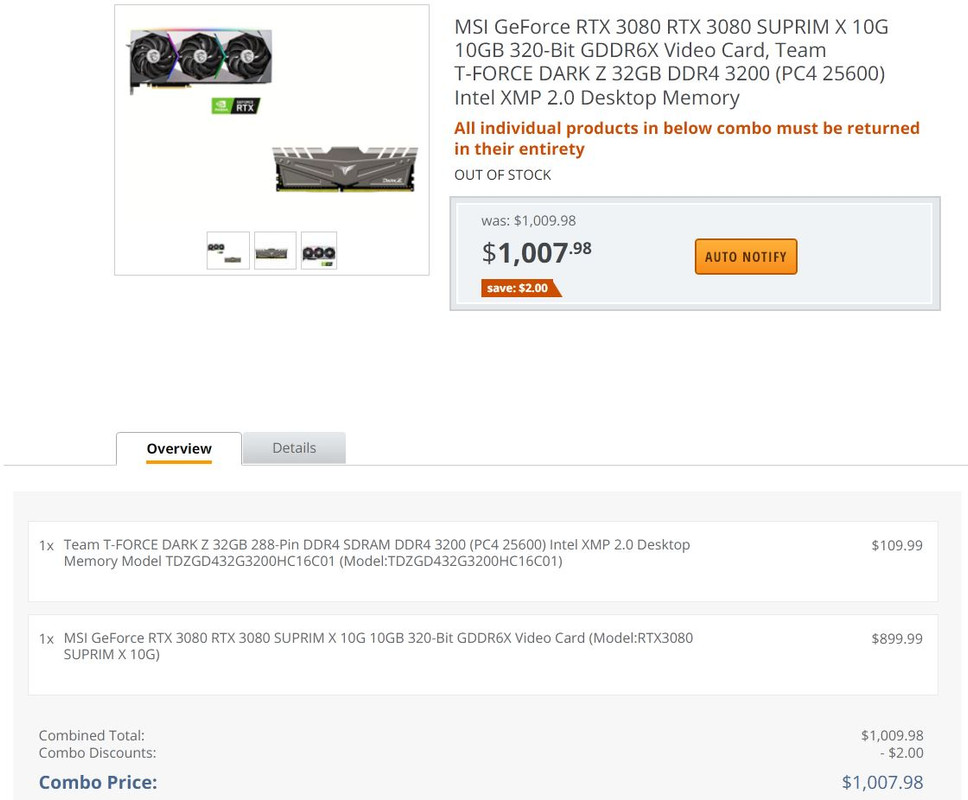 These “Combo’s” are NewEgg’s way to attempt to get GPUs into gamers hands, but many people think otherwise. To some people they feel that NewEgg is no better than the scalpers and are trying to rack in cash. By the looks of it both sides could be true. My opinion on the matter is that if NewEgg truly wanted to make these Combo’s less of a headache for actual gamers they would pair it would something cheaper like a $10 USB thumb drive or something similar. Better yet since NewEgg clearly has no issues creating “new” listings daily why not create a new listing for the GPUs that they have on hand instead of these combo’s which are clearly not slowing down anyone or any bot in the first place. NewEgg is having regular RTX 3000 series as Radeon GPUs and Ryzen CPU “drops”. NewEgg announces these drops on Twitter shortly before they go live, normally around 7PM EST, with new combo web page links for each product. That is somewhat productive and gives actual humans a chance to purchase one, but we all know those bots will always have a one up on us. Not to forget to mention that there are TONS of people running free bots and bots that they have payed for just to get their favorite product (or worse resell+scalp).

So scalping is slowly changing the industry so the industry must adapt. Best Buy is only allowing RTX GPUs to be purchased online with a catch, they are now requiring people to select their store locations and I have seen Best Buy send out notification emails with a PIN number to complete the transactions. There is also a period where you must wait before a GPU can be added to the shopping cart. Best Buy will not ship directly to home addresses during this time, but customers can pick up their GPU from the Best Buy stores. This does help, but won’t necessarily solve all the problems. What is helping is that Best Buy appears to be selling regionally which is pretty decent I suppose. For example, you won’t be able to make a purchase more than 250 miles away from your store location. Best Buy is also selling at MSRP so that’s always a great thing if you can get your hands on one of the GPUs this year. Other legit companies such as Tiger Direct has apparently been selling RTX 3080’s for more than $100 over MSRP as well as RTX 3090’s $200 over MSRP. Basically they are displaying the same type of behavior that you would expect from scalpers or resellers. Selling is a “strong” word to use in this case, more like “pre-ordering” which ultimately becomes “backordered”. It’s worth noting that Tiger Direct goes as far as to make you pay right away even before the item is on hand and\or shipped. Obviously you can call in and complain to get it cancelled. It is going to be impossible to obtain any GPU when Nvidia, AMD and AIBs all have shortages. Locally I have personally came across businesses in my area trying to cash in on the craze and claim that the only way they can get GPUs is by paying scalpers prices so they feel they must charge over $1000.00 for RTX 3080s to make a profit. These are legit and well established computer businesses that can get stock from distributers, but that goes to show that no company would miss a prime opportunity such as this current GPU craze.