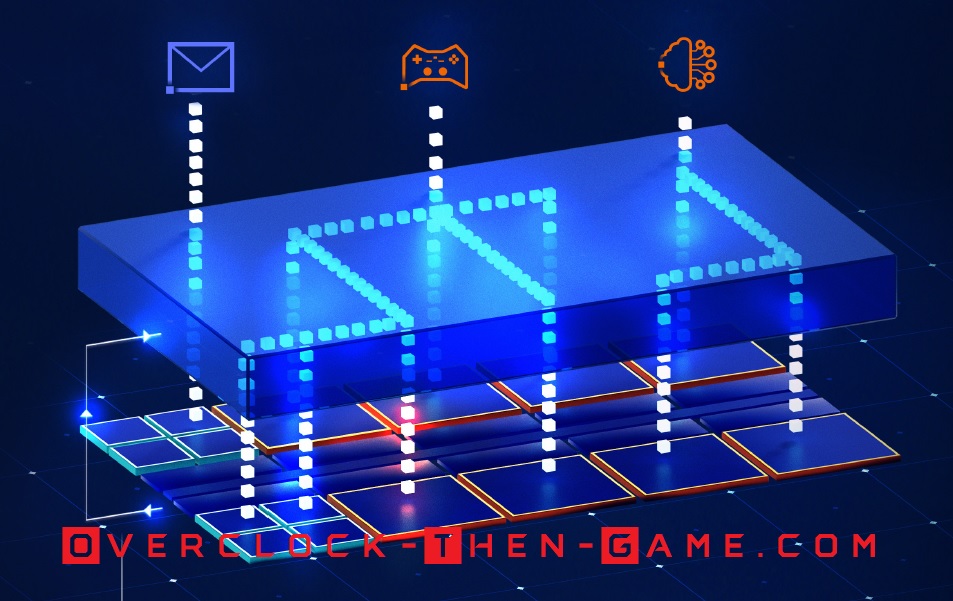 In the chart below I have included 3 results and I need to briefly explain ASUS MCE (Multi-Core Enhancements). The stock Core i9-12900K has a CPU Package Power Limit (PL) of 241 Watts and the processor will prevent the CPU Package from exceeding this limit. That means that if you attempt to overvolt or overclock the i9-12900K and go beyond Intel’s built in CPU Package Power Limit 1 (PL1), the processor will limit CPU power consumption to only 241 Watts; thus using less power, limiting high temps and limiting IA Core frequencies. In the ROG UEFI\BIOS ASUS uses a feature that they named MCE (Multi-Core Enhancements) to bypass the PL1 limit. This allows the CPU to exceed the 241 Watt limit and will push the CPU Package Wattage much higher (250Watts – 280 Watts and higher if possible) if the CPU temperatures allow. ASUS MCE is basically overclocking the CPU and if you have a decent CPU cooling solution you will get better gains in performance beyond Intel’s built-in Power Limits. Please do not confuse the CPU Package Wattage with the actual wattage that will be pulled from the wall. My charts shows the wattage that will be pulled from the wall outlet.

So as we can see in the chart above I have decided to include all of my stock results vs my overclocked results with ASUS MCE Enabled and Disabled for a clearer comparison. As a reminder all of my Power Consumption results are what my PC is pulling from the wall outlet. With Intel’s default power consumption (default Power Limits enabled = ASUS MCE Disabled) I was only using 330 Watts under a full load in Cinebench R23. When disabling Intel’s Power Limit and Enabling ASUS MCE, I was able to exceed the CPU Power Limit 1 limitation (PL1=241W) which will naturally cause me to pull more wattage from the wall on average. With ASUS MCE Enabled I pulled up to 381 Watts from the wall. That is an addition 51 watts on average when the motherboard is allowed to bypass Intel’s CPU Power Limit. Comparing the Stock with MCE Enabled to my Overclocked results with MCE Enabled we see increase 60 watts on average. That is a 16% increase in power consumption with my overclock. However, this isn’t the typical wattage I would use for my overclock. This is only true if you are running 100% CPU loads on the PC with specific workloads. During Idle periods the overclocked 12900K only pulls around 97 watts on average. Intel and ASUS includes many ways to limit power consumption when running higher overclocks to prevent needless overvolting when transition from Idle periods to light workloads such as opening a web browser or basic apps.

For my gaming benchmark results I decided to use a synthetic benchmark and typical in-game benchmark. This should give a decent representation of what to expect for typical gaming power consumptions. I decided to use 1440p to give a better presentation of the CPU and GPU performing in gaming benchmarks. I felt that 1080p would not have stressed the GPU enough since the bottleneck would be the CPU and we already know how much wattage the CPU alone can pull under 100% loads. 4K would have pushed the bottleneck to the GPU and the CPU would not have had to work as hard so 1440p is the middle ground during these benchmarks.

Firestrike Extreme average was 514 Watts across all of the Graphics and Combined benchmarks. I separated the CPU benchmark since the main focus is the CPU and the GPU working together. Shadow of the Tomb Raider @ 1440p shows 551 Watts on average. I lowered the Power Limit down to 70% and only pulled 454 Watts from the wall. That is a reduction of 97 watts. So while the overclocked Power Consumption wattage wasn’t looking so great at first we see that things aren’t that bad since the processor won’t be stressed at 100% during typical gaming sessions. There are many ways to limit power consumption as well on the CPU and GPU. So if you know that you do not need to max out the cores or the Graphic Card for specific workloads and gaming\streaming sessions you can easily limit the power consumption.