A question was asked about the power usage during my benchmarks and I didn’t have an answer; therefore I found an answer. I can’t go back and benchmark all of the games and give power figures since that would take a long time and be very tedious, however, I have re-ran a few simple synthetic benchmarks to give everyone insight into the X58 + Fury X combo. The charts below are very similar to my power usage charts used in my X5660 Review 6 years ago. In my X5660 Review I included Monitors, and pretty much anything connected to the same power block that my PC used. The difference this time around is that the wattages will only include the Motherboard and anything connected to it such as the HDDs\SDDs\PCIe devices (no monitors etc.). These types of hardware on the motherboard are usually low powered so they shouldn’t affect the wattage results that greatly. I have also included my CPU stress test wattage results.

I will re-post my CPU specs with all of the relevant information below:

My Asus Sabertooth X58 pulls very little power when it is not powered on as expected. You can see a 35watt difference for the Average during the POST & Booting phases between the stock and overclocked X5660. That’s not so bad, but the peak\max does go up an additional 54watts with the 4Ghz OC applied. The stock voltage for an Idle X5660 is 0.98vCore and for the 4Ghz overlock I wanted to use a “normal” range that most people would use to hit 4Ghz. Therefore I used 1.24vCore for my 4Ghz overclock. Between the Stock X5660 @ 1.6Ghz Idle (0.98v) and the overclocked X5660 @ 4Ghz (1.24v) the differences are very small for when the CPU isn’t doing anything or performing light task such as word processing, web-broswing and things like that as you can see. There is only roughly a 10 wattage difference between the two CPU clocks at idle stages. All of that changes once I run the old IntelBurnTest v2.54 to stress test the CPU. From that point the difference is quite large. The Stock X5660 hits 3.1Ghz @ 1.14v -1.16vCore (these voltages might be different for other MB+X56xx combo). The X5660 @ 4Ghz is obviously running constantly @ 1.24v. We see an average difference of about 112watts when the CPU is stressed up to 100%.

I know I have spoken a lot about the CPU portion of the chart even though this is an article dedicated to AMD’s Radeon Fury X, but that X58+X5660+FuryX combo has been great and this is my first time actually looking into the power draw. It is Fury’s turn now I promise, I decided to use FireStrike Combined Test to show the power consumption that many can expect during gaming & streaming sessions. As the test name “Combined” states, it will test both the CPU and GPU together. The Fury X TDP is rated at 275watts. The stock frequency and voltage are 1050Mhz on the Core with 1231(mV). As I stated earlier please remember that I am getting all of the wattage from all devices connected to the motherboard (total system power draw) or in other words total wattage that would be coming through the socket in the wall, not only the GPU wattage.


As many people have noticed over the past 8 years or so AMD is great for undervolting or underclocking. Obviously undervolting is more popular since most people want the full power of the GPU and want to use less power\watts. On the other hand if you know that the game you are playing doesn’t require the full core clockspeed running at the max clocks you can limit the core clocks (by lowering the core frequency) and potentially get even better power usage (by lowering the voltage-mV) since you won’t need to use a lot power\watts to support a lower core frequency. In the past many gamers have obtained this by using 3rd party applications with great results. AMD has sense incorporated these features within Radeon Software with things like “Radeon Chill”, AMD also allows users to use sliders to control both the “Power Limit” and the “Max Frequency” percentages.

Instead of being limited to 3rd party applications and if sliders weren’t enough AMD has offered us something completely new and cool. AMD now allows gamers to control the “States” directly and set the core clock and voltage settings per state in their “GPU Tuning” settings. For instance my Fury X has 8 States. State0 (Min) to State7(Max). You can’t change State0 core clock or voltage, but you are free to change State1 through State 7 which is pretty cool. You can select a precise number by typing or dragging the bar to select the exact core clock frequency you for each stage. What’s even better is that you give each individual game on your PC their own “GPU Tuning” which makes sense because each game is different. So when you load those games the GPU Tuning profile will be automatically loaded. There’s no reason to run games such as Minecraft or a 2D gaming title while using the full power of the GPU when you only need less than half to get great FPS. AMD has offered these features for awhile now, but if you haven’t been using an AMD or follow AMD Drivers\GPUs over the past few years this info might be helpful. 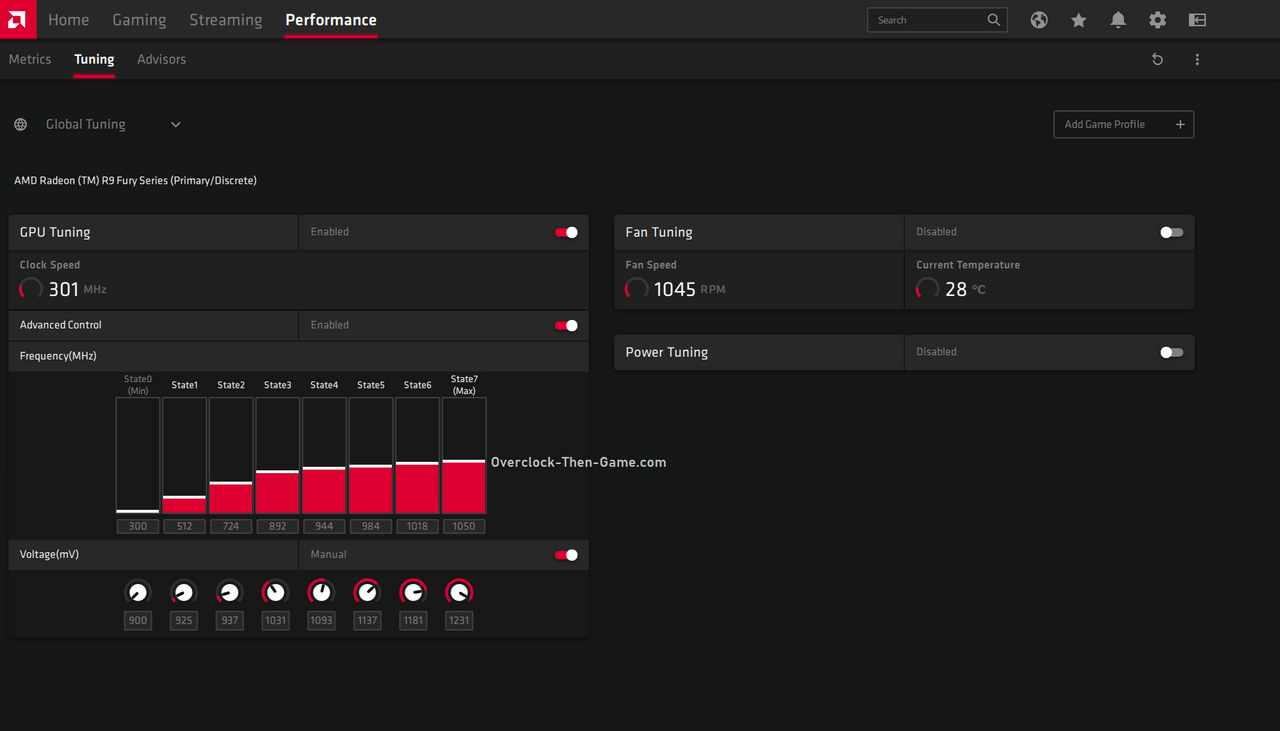 Focusing on the “stock” X5660 @ 3.1Ghz (1.15v) for a moment I wanted to show the difference between the stock Fury X voltage (1231mV) and the “undervolted” Fury X (1137mV). I wanted to keep the stock core clock (1050Mhz) and I wanted quick results so I used 1231mV for undervolting stability. Of course you can probably tweak more settings and get better results. While running the FireStrike Combined benchmark we see that I was able to lower the power usage average around 34watts with the undervolted Radeon Fury X. The peak also lowered by 24watts so those are pretty good results. It kept my X58 gaming rig under 400watts during a synthetic benchmark that tests both the CPU and the GPU pretty well.


Now when we look at the “overclocked” X58 & X5660 @ 4Ghz (1.24v) we get much higher power usage, but it isn’t as bad as most would have thought with a 12 year old Intel platform and a 5 year old AMD GPU. The peak wattage I was able to pull was 522watts in FireStrike Combined benchmark and this was using the stock Fury X @ 1050Mhz (1231mV). The average was around 509. When I undervolted the Fury X to 1137mV I was able to lower the average power usage by about 50watts with a peak of 477watts. So I was able to remove roughly 45-50watts and keep my overclocked X58+X5660 with the undervolted Fury X under 480watts(peak). I can’t complain about those results at all.


So a good 600 – 650watt PSU would be fine for this rig and would leave room for some heavy CPU and GPU overclocking. As a reminder All of these results are TOTAL wattage from all devices on the motherboard (SSD\HDDs\PCIe devices and so on).