Nearly 3 months later we still see Crystal Dynamics attempts to "learn and implement" DX12. Rise of the Tomb Raider was developed with the DirectX 11 API and later updated implemented the DX12 API. Previous DX12 results have been abysmal, but now they have included Async Compute for AMD GCN 1.1 architecture. My Fury X supports GCN 1.2 so there shouldn't be any issues. I have ran several benchmarks to see if Crystal Dynamics have improved their DX12 implementation or not. Anything should be better than what we received nearly 3 months ago. Orginally I ran the benchmarks using the latest drivers from AMD [Crimson 16.7.2 Beta] and had poor performance with the DX12 API with Async Compute. I decided to double check my results so I removed the drivers and reinstalled the drivers. It appears my driver issue has been resolved.

Let's take a look at the Frame Pacing when comparing DX11, DX12 and DX12 with Async Compute: 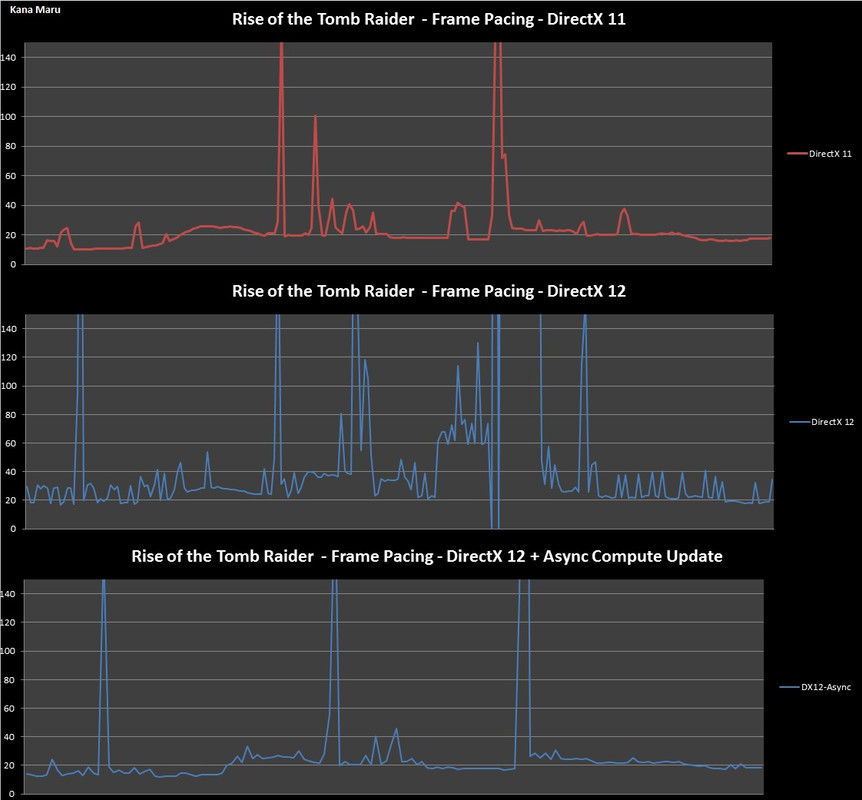 The raw data in the charts does show that the developers have fixed their constant stutter. There are still some issues that need to addressed, but overall the game is very playable at 1440p and 4K. You can ignore the massive spikes that are off the charts since those only occurred when the game is loading the next area. The developers now has DX12 working properly with Fullscreen and Exclusive Fullscreen. DX12 with Async Compute pacing is identical to the DX11 API. Hopefully more developers build their games around DX12 instead of implementing wrappers and late implementations. It took awhile, but DX12 is finally playable and offers a better experience according to the chart above. The internal benchmark has been pretty accurate with my Real Time Benchmarks so far. Let's see how DX12 with Async Compute translate to actual gameplay. Remember that all of my benchmarks are using SMAA, even at 4K. I like to max all settings when benchmarking. 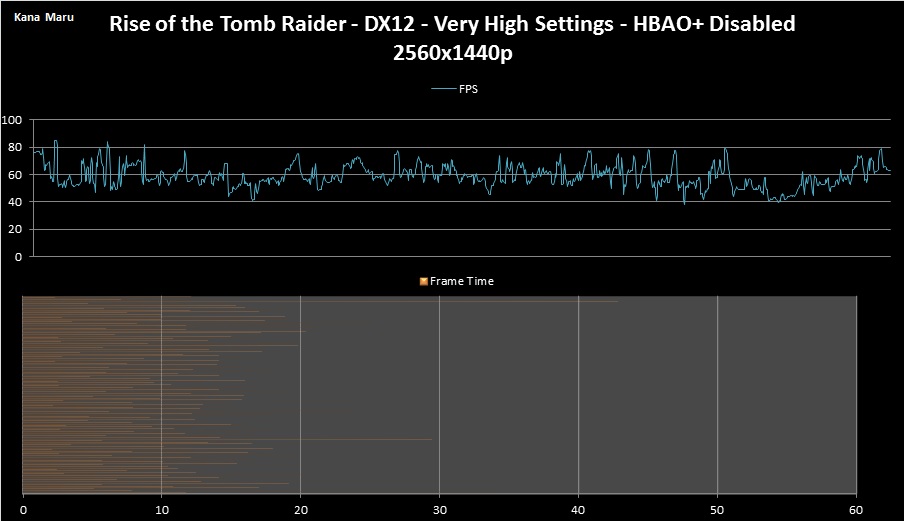 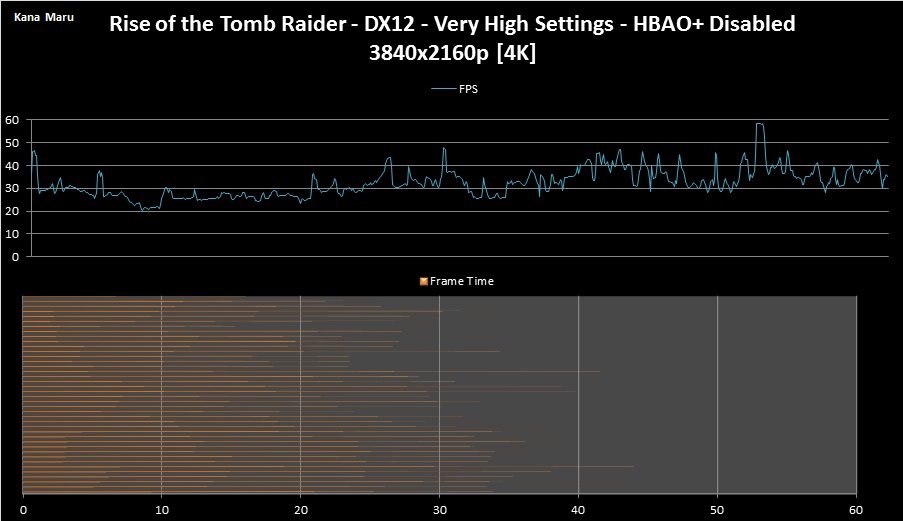 The game performs well at 1440p and 4K. There was no micro-stutter and there were no issues running the game in Exclusive Fullscreen Mode. That mode causes issues in some games when it comes to DX12. Let's see how well DX11 compared to DX12 with Async.

DX12 with Async Compute increases the FPS Min by 33% at 1440p and 27% at 4K. The actual average frame rate is basically the same regardless of which API you use. Usually DX12 offers better frame rate averages as seen in games such as Hitman and Ashes of the Singularity. This is not the case in Rise of the Tomb Raider. However, DX12 would be the go to API since the minimum frame rates are much higher than the DX11 frame times.  I'll tip my hat to Crystal Dynamics for sure since they have fixed their previous DX12 issues on AMD GPUs, but they must learn how to get more out of the DX12 API. Rise of the Tomb Raider was built around DX11 so DX12 is like on the job training for the developers at this point.

If you want more frames per second @ 4K with a Fury X or a 4K capable 4GB GPU you can disable AA [FXAA\SMAA] and lower the Texture Quality from Very High to the High setting. All other settings can use the Very High preset. I'll probably get around to running test with the optimized settings above when I get more time. Check back for updates and be sure to check out this game if you haven't yet. it's a great title and one of the best looking games to release this year.